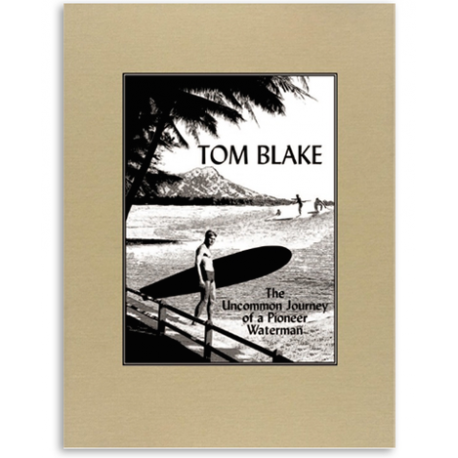 Tom Blake - The uncommon journey of a pioneer waterman

In surfing there are a handful of pioneers who stand out as giants for their contributions to the development and evolution of the sport. In the first half of the 20th century there are two who stand out even among the giants — Duke Paoa Kahanamoku, certainly, and after him, Thomas Edward Blake.

Tom Blake was a man’s man, a jack of all trades and one of modern surfing’s most decorated forefathers. This book, Tom Blake: The Uncommon Journey of a Pioneer Waterman, is a comprehensive look at his life and legacy.

Blake was from Wisconsin. Born in 1902 in Milwaukee, which isn’t a beach town but it at least has Lake Michigan. His father Tom Sr. was a bicyclist and a dancer, his mother, Blanche, a stenographer who died when he was eleven months old. When he was nine he watched a newsreel of surfers in Waikiki, and at 18 he met Duke Kahanamoku in Detroit after the 1920 Olympics; these two events would combine to be the catalyst for Blake’s lifetime commitment to surfing.

Blake and Duke were bros. Four years after meeting in Detroit, Blake crossed paths with Duke again in Waikiki and bonded first over competitive swimming, an easy segue to the bond they would share while revolutionizing surfing. They acted, swam, surfed, partied, and eventually became legends together.

He was a lifesaver. His swimming background was a natural introduction to lifeguarding for Blake, who in 1924 patrolled in Santa Monica. His interest in surfing piqued while on the waterfront, where he’d later guard with Duke at the Santa Monica Swimming Club. He’d go on to work on coastlines around the country, with large amounts of time spent lifesaving in Hawaii.

He was an actor. In 1922, Blake got his big break into the movie industry with some stunt work in Where The Pavement Ends, a film starring Ramon Navarro, wherein he wrestled a dead shark for an action scene. He’d later fill in as a body double for Clark Gable and appear in a good number of motion pictures to maintain a steady income while living in L.A. and commuting to Hawaii to surf. In 1927, Blake was part of a tragedy where multiple fellow actors and local extras drowned in the Copper River in Alaska. The incident sparked his interest in water safety, which he’d go on to dedicate most of his life to.

He was a Guardsman. After the Japanese attack on Pearl Harbor, Blake decided to enlist in the Coast Guard because it was “the thing to do,” despite the fact that he was 40 years old at the time. Over the course of 3 years, Blake rapidly rose through the ranks, eventually becoming a platoon leader and commanding a company of 54 men and 20 canines for search and rescue. His lifeguarding and waterman expertise served him well, and at 43, after drafting multiple rescue manuals and survival guides, he was honorably discharged so he could return to his surfing and seafaring ways in Waikiki.

He was an author. In his book, Voice of the Atom, Tom Blake wrote that “Nature = God”, which for him “provides a ready framework for human ethics.” It was inspired by time spent in dialogue with Anthony, an itinerant monk, and the book contains all the knowledge that Blake says he “patiently gleaned from seventy eight years of life on earth.” The entire text is included, and Blake concludes and sends the reader forth with this sentiment: “So, young surfer and old, play the game of life the same way as you have been successful with the live, breathing ocean. And good riding.”

He was an inventor. Blake was autodidactic, a self-taught man and a wealth of knowledge. His contributions to surfboard design are immeasurable. From his varied inventions to his progressive templates, his biggest impact in surfing can be whittled down to the work he did with those era-defining boards. He made the first hollow board ever, calling it first a cigar box then later a kook box. The fin, a keel of sorts for the giant boards of the era, was his brainchild, as was the leash, which he at first attached around his waist. He invented the sailboard, which in itself invented windsurfing, and then there was the collapsible surfboard experiment, which is only worth mentioning out of novelty. He was doing so much on the water he wanted it documented, so he created the first waterproof camera housing, changing surf photography and kick starting what was probably the early genesis of a movement to compile those photos in a magazine with words written about them and thus, in essence, creating my job.