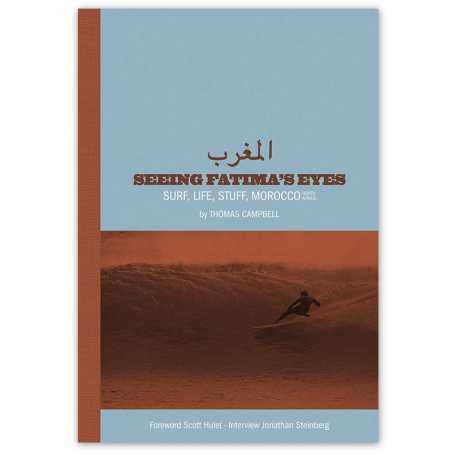 Seeing Fatima's Eyes is a new photographic essay by Artist, film maker, Photographer Thomas Campbell (born 1969), on surfing and life in Morocco. In the early 1990s, just prior to his immersion in the scene based around New York's Alleged Gallery, Campbell would regularly hole up in the North African enclave to produce paintings for solo exhibitions in Paris, New York and Rabat, strategically spending the winter months there to reap the bounty of the Atlantic's wave season. Later, over the last ten years, Campbell brought various wave sliders - Dan Malloy, Alex Knost, Craig Anderson, Lauren Hill, Dave Rastovich and Ryan Burch) to join in on what thaw north west corner of Africa has to offer. This book, the second in Campbell's Slide surfing series (following 2012's Slide Your Brains Out), records these collective Moroccan adventures from the past 20 years, in color and black-and-white images that range from the everyday to the sublime.  Foreward by Scott Hulet and an interview by  Jonathan Steinberg     144 pages hard cover 6.75 x 9.75 inches